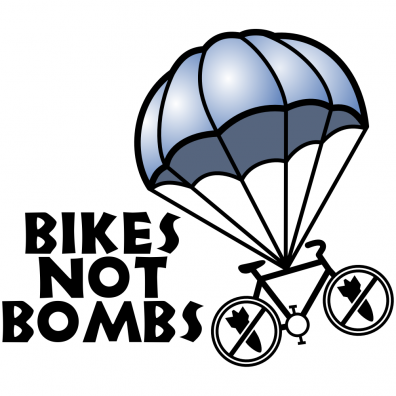 Join this Critical Mass bike ride to the ExCeL Centre in London’s Docklands, where there will be a day of action against the DSEI arms fair. Bring noise, colour and defiance.

With more than 1,000 companies and 30,000 attendees, it includes many governments with appalling human rights records.

This event is part of a big day of action at the end of a week of blockades against the setting up of DSEI. The different days have different themes:

Come to Cardiff on the 16th of March 2016 to take action against the DPRTE arms fair at Cardiff Motorpoint Arena.

END_OF_DOCUMENT_TOKEN_TO_BE_REPLACED 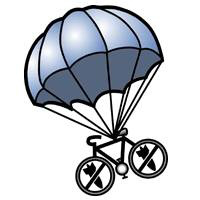 Join the bicycle ride as part of the day of mass action against DSEI, one of the world’s largest arms fairs.

Meet by the bike racks outside Societe Generale; cycle to the ExCeL centre in London’s Docklands, where it’s all happening.

Ride the Bikes Not Bombs Critical Mass to the arms dealers’ dinner!

END_OF_DOCUMENT_TOKEN_TO_BE_REPLACED 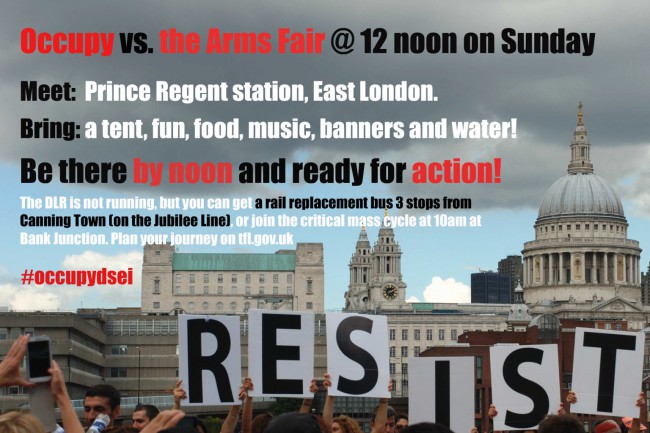 END_OF_DOCUMENT_TOKEN_TO_BE_REPLACED

Part of the day of action against DSEI, the world’s largest arms fair with 1,300 arms companies and 28,000 buyers. It’s all taking place at the ExCeL centre in London’s docklands.

We will also be riding to the arms dealers dinner on Thurs 12 Sept.

Download the flyer here and help spread the word!

In 2011 all across the world people took to the streets in from Greece to Spain from Egypt to New York. These uprisings where the first glimpse of a global movement against political and economic injustice. In 2013 the movement continues and has spread to Turkey and Brazil where people face brutal state repression.

END_OF_DOCUMENT_TOKEN_TO_BE_REPLACED

The government is welcoming the world’s worst human rights abusing regimes to shop for weapons in London. WHAT WILL YOU DO?

A massive arms fair is planned to take place in the UK in September 2013. The UK government plans to invite human rights abusing regimes, such as Algeria, Bahrain, Colombia, Saudi Arabia and Vietnam, to the London arms fair to court them and sell them weapons.

END_OF_DOCUMENT_TOKEN_TO_BE_REPLACED

The anti-militarist demonstration on June 12 had been called by Smash EDO, Disarm DSEI and Sussex Stop G8 and was part of the Stop G8 week of action in London.

After an eventful Carnival Against Capitalism on June 11, which had seen a ridiculously over-the-top policing operation throughout central London, including a brutal raid on the Stop G8 convergence space, it was time to show the police and the arms dealers that neither mass arrests nor physical attacks would keep us off the streets.