The anti-militarist demonstration on June 12 had been called by Smash EDO, Disarm DSEI and Sussex Stop G8 and was part of the Stop G8 week of action in London.

After an eventful Carnival Against Capitalism on June 11, which had seen a ridiculously over-the-top policing operation throughout central London, including a brutal raid on the Stop G8 convergence space, it was time to show the police and the arms dealers that neither mass arrests nor physical attacks would keep us off the streets.

A rallying call on the Stop G8 website read:

Whether it’s smashing its way into the Stop G8 convergence centre, attacking Taksim square with tear gas and rubber bullets, or bombing innocent civilians in Gaza or Afghanistan, capitalism depends on ugly brute force to impose its rule. We will not be cowed into submission by state repression.

This statement was issued with an invitation to protest London’s “dealers in death”, starting at BAE Systems, the world’s third largest arms manufacturer which sells its weaponry indiscriminately around the world.

Not content with having nicked most of the props and megaphones (and some people) for the action the day before, the cops tried to repress the demo before it had even started, with two van loads of police rushing half a dozen anti-militarists around the corner from the meeting point. Surrounding them, they were told that they were being held to prevent a breach of the peace as they were “going to cause trouble”. After the scenario quickly attracted a number of journalists with video cameras and a legal observer, the cops changed their minds and let the perceived troublemakers go after all.

Once at the meeting point demonstrators were met with a picket line of grim reapers already positioned outside the BAE entrance and given white “weapons inspector” boiler suits and whistles. The 150 strong crowd included people from Stop The Arms Fair and Campaign Against Arms Trade and well as Smash EDO, Disarm DSEI and Stop G8 protesters.

After half an hour of noise-making at BAE, the demo set off for an angry tour of arms dealers in the West End. Next stop was Thales, the world’s 11th largest arms company, which produces radars and electronic surveillance satellites, drones and helicopter avionics, armoured vehicles, mortar systems and missiles.

The demo continued towards its next target tailed by a large number of police and a dozen journalists. After taking Lower Regent Street, it reached Lockheed Martin. Clearly not very proud of what it does, the world’s largest arms producer’s office is located in an unmarked building just off Piccadilly.

The protesters were determined not to let them hide, arriving to loud chants of “arms dealers – terrorists”. Once outside the building the demo held the road, highlighting Lockheed Martin’s exports to Israel with “Free Palestine” chants and megaphone speeches.

Next up was a quick stop at another anonymous-looking building, where activists carrying banners mounted the back of an lorry parked outside and staged a noisy protest. The target was Northrop Grumman UK, one of the world’s largest military contractors and the largest builder of naval vessels.

The demo gained a lot of public attention as it continued across Leicester Square, down Charing Cross Road and on to the Strand, where it stopped outside the missile company MBDA. It’s shareholders include BAE Systems, EADS and Finmeccanica.

After the mass arrests and general police repression the day before it seemed suitable that this demo included Charing Cross Police Station on its route and since it is located very near to two arms companies this did not present a problem. As the station was swamped by its own police, the demo blocked the entrance to loud chants of “no justice, no peace -fuck the police” and “Who protects the arms dealers? The police protect the arms dealers!” That done, the anti-militarists turned the corner, where the demo ended outside QinetiQ, manufacturers of drones and armed robots used in Iraq and Afghanistan.

After the demo split up and most people headed to the pub, we had reports that the grim reapers from Stop the Arms Fair showed extra resilience and visited the London Transport Museum, to say no to arms dealer sponsorship. 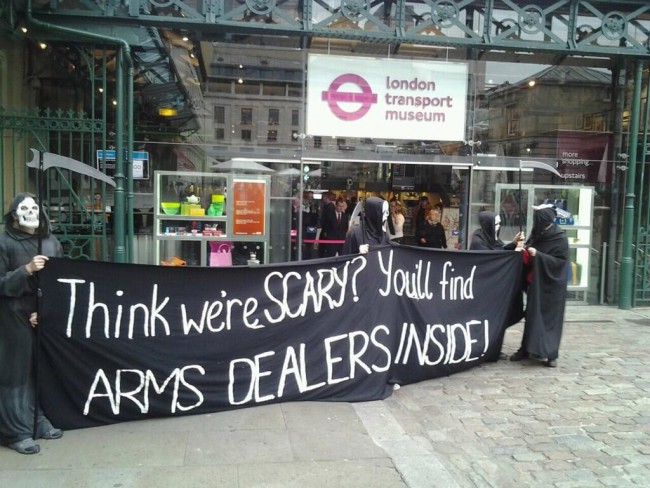 For more locations of arms dealers in the West End, have a look at the Stop G8 map. Remember that they will still be there after the week of action!